Private Chef Neill Anthony is hosting a cooking class on Sunday 19th of July @ 13:00 LIVE on his personal Instagram page to help bring a dose of culinary inspiration into your home.

While popping over to La Mouette to try out one of the fabulous dishes designed by Neill Anthony might be out of the question until the end of July, the chef is bringing his world-class white onion risotto straight into your kitchen!

Make sure you get your ingredients and sip on Deetlefs Wine and come cook along! 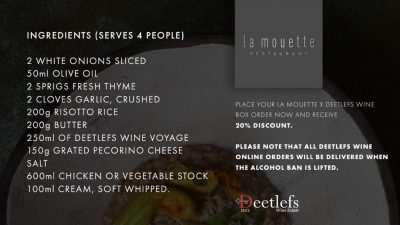 La Mouette – French for “Seagull”, of which there are many in Sea Point is a French-inspired modern European restaurant that offers seasonal menus which change regularly. We pride ourselves on showcasing only the best of local producers and take great care in sourcing these ingredients.

Patrons at La Mouette also have the option of further enhancing the carefully curated menus with a meticulous selection of complimentary wines, expertly selected by our in-house wine list consultant.

La Mouette restaurant is housed in an original feature Tudor house, once the home of the local Mayor. It has 2 floors, 4 dining rooms, 6 fireplaces, a bar/lounge area as well as a cobblestone courtyard outside – perfect for cozy winter dining by the fire or summer dining al fresco under the stars.

Neill’s brand of understated charm and passion for exceptional dining excellence has helped establish him as a much sought after private chef to discerning clients both in South Africa and around the world. He spent ten years in Europe honing his skills in the professional kitchens of Gordon Ramsay, Alyn Williams, Jerome Henry, and Marcus Waering.

Season 1 of the 13-part series premiered on SABC 3 in March 2015 before enjoying a secondary broadcast via the pay-TV channel, Food Network in South Africa, and in over 90 countries and territories across Europe, the Middle East and Africa, including the UK and Ireland, from August 2016.

Based on the successful performance of the first and second series, the third season premiered locally on SABC 3 in 2018, followed by Food Network in January 2017. Besides, Australian media company Foxtel also acquired the broadcast rights for seasons one and two of the series for its Lifestyle FOOD channel, which is also home to series such as The Great Australian Bake Off.