Like most things precious, South Africa’s most expensive dessert wine wasn’t made in a day.

Back in 1974, two winemakers from Breedekloof entered into a friendly wager. One claimed it was impossible to mature a Muscat d’Alexandrie for any length of time.
The other winemaker believed otherwise. His name was Philippus Petrus Deetlefs.

To prove his theory, he filled a third of a tank with Hanepoot lees, and the remaining two thirds with Hanepoot wine, and in closing the tank, he began a new chapter in the Deetlefs story. Fifteen years later, in 1989, the tank was opened. Inside was a unique and sublimely flavoured wine.

Today, this Muscat d’Alexandrie is deemed one of the world’s rarest wines, as the small volume of this very special batch is decreasing. In honour of Philippus Deetlefs’ legacy, only one small batch of Muscat d’Alexandrie will be made every twenty five years.

It is this passion for innovation that has defined the Deetlefs Family wine estate throughout its almost 200-year history. And although forty six years may seem like a long time to make a wine, our Muscat d’Alexandrie 1974 is proof that certain things are well worth the wait.

Thick on the palate, with flavours of raisins, minerals spice and, again, toast.

Any rich, spicy pudding and it can be very sweet too. South African  oven-baked desserts will be perfect.

Duck in orange sauce can be served with this wine, but many people will find it over-kill. It is simply a fact that so few wines are suitable for sumptuous desserts, that it almost seems a pity to try and force them to partner savory dishes. A brilliant wine like this should accompany those old brilliant sweet things which are so hard to match with other wines! 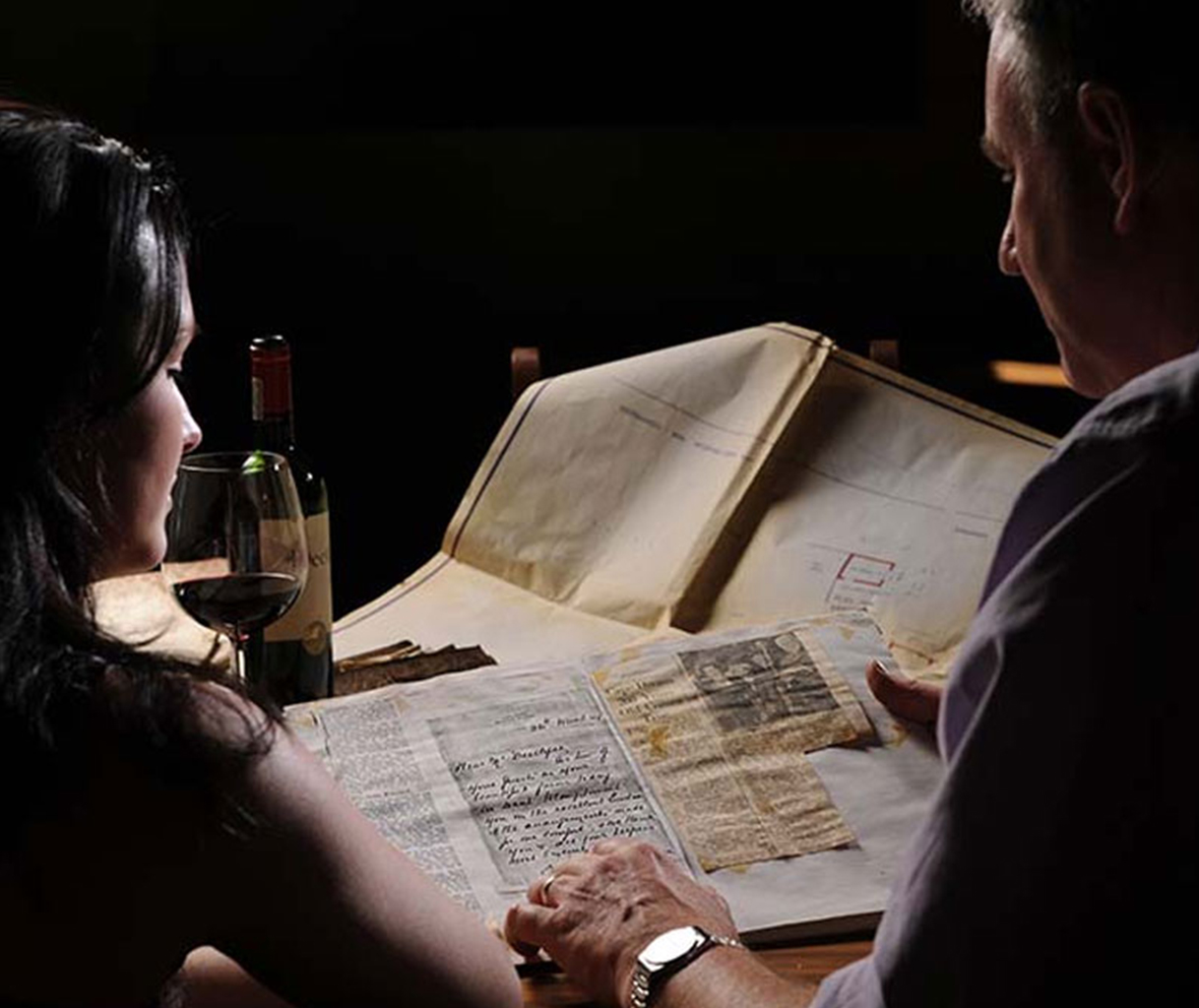 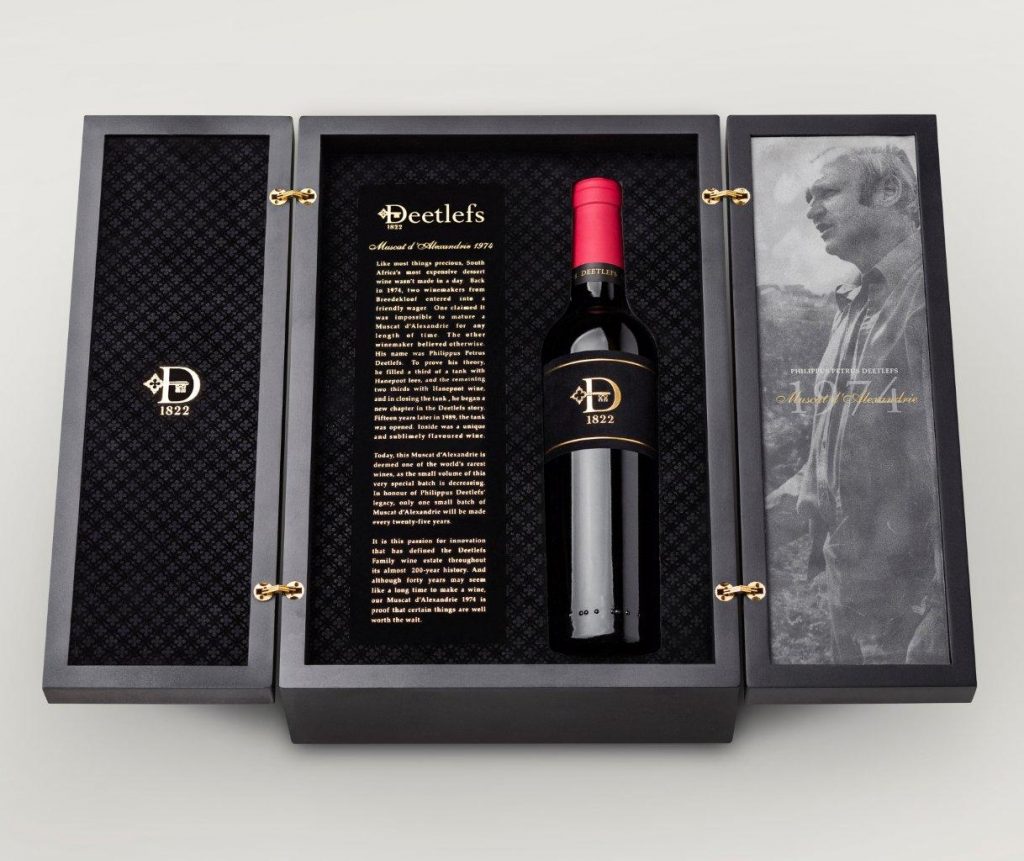 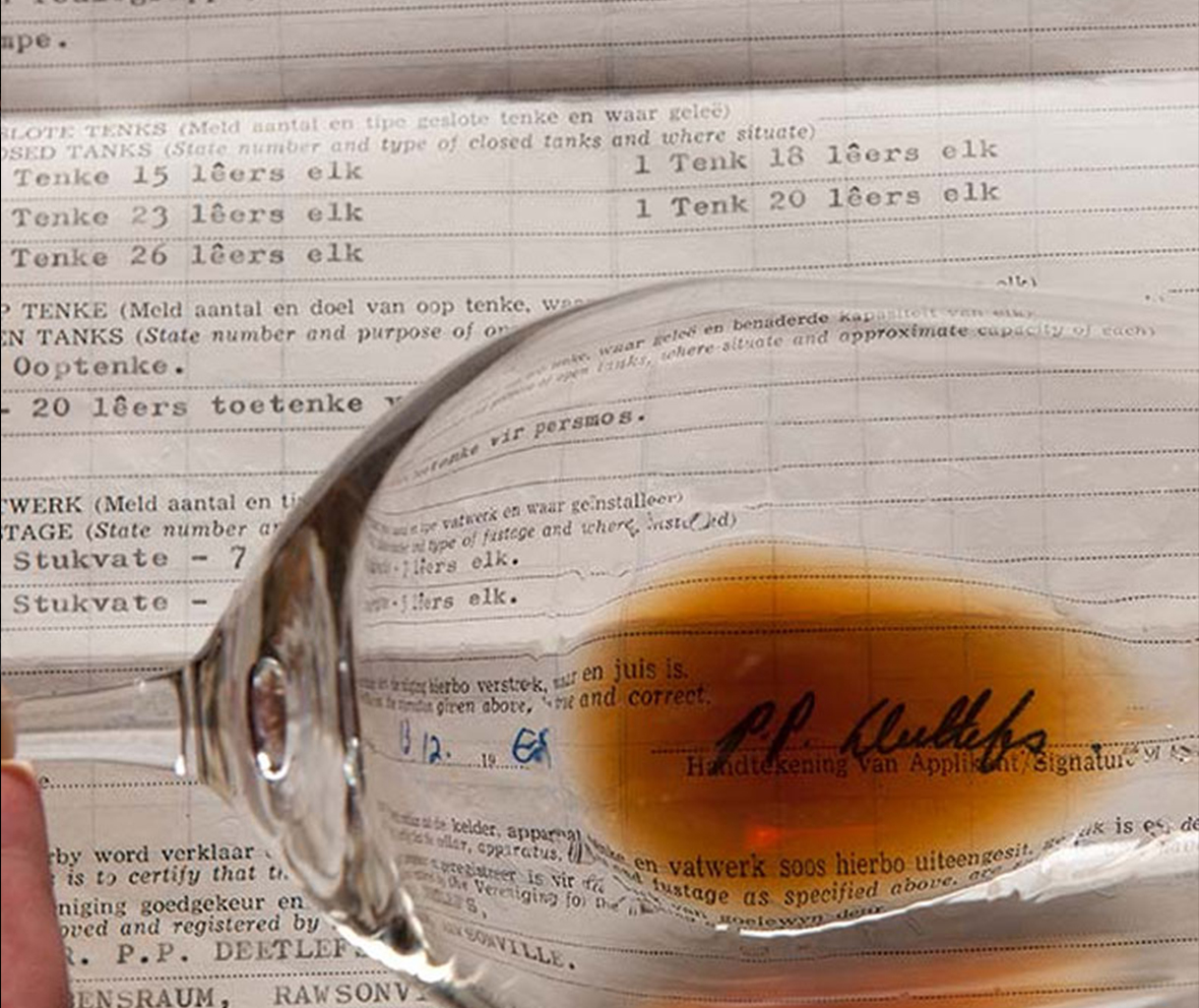 What makes this wine so special?

The 1974 Muscat is unique to any other product in terms of the story, the quality and the price. There is only one batch of 3500 litres of this special 1974 Muscat d’ Alexandrie available forever and a day. This 1974 Muscat must be seen as more than a wine; a unique product that is one of a kind in the world of luxury goods. As such it cannot be compared with any other wine. Third party confirmation on the story, the quality and the price complete the picture.

What determines the price?

Rarity and uniqueness! There is only 2700 litres of the 1974 Muscat that my father made available, and it can never be replenished. The rarity, value and price will increase as the demand grows and volumes decrease. The intrinsic value of a unique product like this is determined by the rarity, availability and future demand. This wine is being described by some as “liquid gold”.

Is it sold as an investment and if so, what is the growth potential?

We do not market and sell it as an investment, however it might turn out to be a good one as the volume of this wine decreases and the rarity value increases. The Deetlefs family will keep a percentage as an investment for themselves.

The discerning individual who is fortunate enough to own and enjoy one of the world’s most rare and unique wines, collectors and/or corporate companies who want to reward their most valued customers.

The story-line of this remarkable product?

This is best explained by a time-line:

1989
The tank was opened and tasted

2004
Price increased to $175 per 375ml bottle
Realisation that we had a very rare and valuable item convinced us to withdraw the Muscat from the market
The last two bottles of the first release ended up at ±2,300 end of that year

2006
Deetlefs branding was changed to reflect the history and values

2015
A small percentage of the 1974 Muscat was released selectively world-wide and was selected for the Gala-dinner at the 2015 Annual Convention of the Leading Hotels of the World in Lausanne, Switzerland (November 2015) together with BlancPain watches, Laurent-Perrier, Moët Hennessy and Pommery
Only 400 bottles were sold before the withdrawal in 2004. A few individuals were fortunate enough to get hold of some.

Are you prepared to buy back some of the first wines sold?

It is policy not to buy back any of it as we do not have any control over the handling and storage conditions.

Did the wine create any excitement?

Since the story behind the origin of this unique product became known, it has generated its own momentum. It was news on television in 2003 (SABC and CNN), as well as on radio in South Africa and various publications (lifestyle, financial and wine publications)

How does the Muscat compare with other wines?

You cannot compare the Muscat as it is unique to any other product in terms of the story-quality-rarity-price-combination.

Does the 1974 Muscat carry any message?

South Africa is a special country with special people. It reads like the history of our country: if you believe in something, act upon it and live your dream, you may achieve it and cause a ripple-effect that will be felt for many generations. Born out of “stubbornness” this special wine carries a message of hope!

How would you describe the quality and what is the further ageing potential of the 1974 Muscat?

Exceptional quality substantiated by awards: Michelangelo (South Africa) in 2000 and Muscats du Monde (France) in 2003.
Wine writers described it as follows:
“Highly individual style for more specialized palates” – Dave Hughes
“Superb old Muscat and a rarity” – John Platter
Unlimited ageing potential! Thanks to a slow oxidation process over many years on the lees, the sulphur is basically zero and the wine very stable.

What does it taste like and where can I taste it?

Unique and exquisitely flavoured, this is a wine that can only be described as a “sweet stunner” – Katinka van Niekerk
Unfortunately the wine is not available for tasting.

What about the future if there is no more available?

In order to honour Philip Deetlefs for his revolutionary vision and tradition, a limited batch (5000 litres) of Muscat has been made in 2003 for a 25 year release in 2028, and one batch of 5000l will be made every 25 years. Although it will never have quite the uniqueness of the first wine made by my father, it will tell the story to generations to come.
“It is special to be part of this historical product.” – Kobus Deetlefs 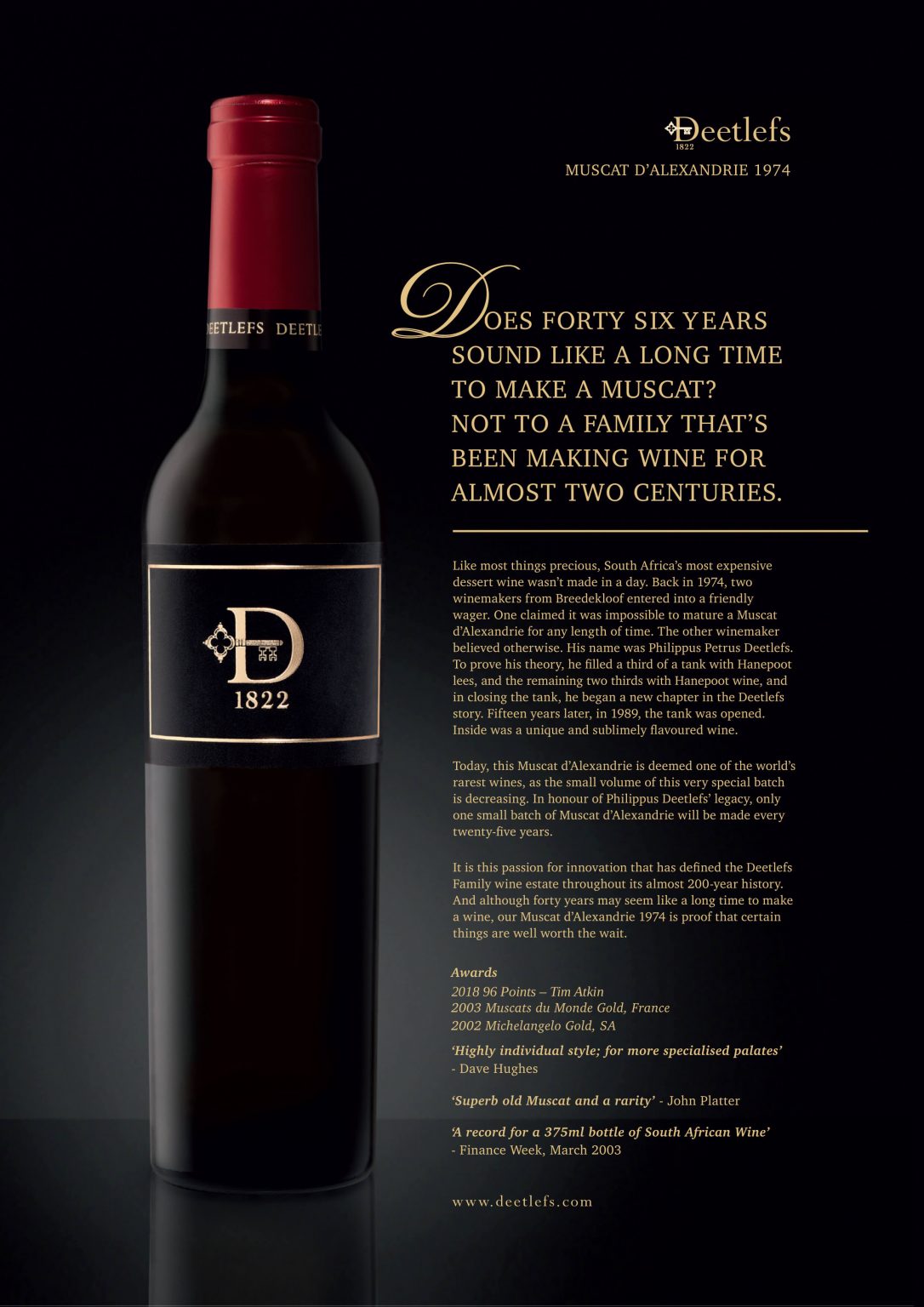